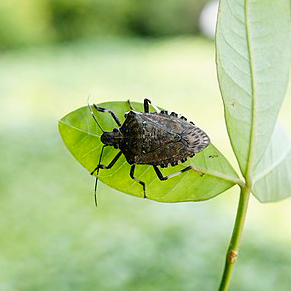 Stink bugs get their name from their tendency to release a repelling odor when crushed or disturbed. Stink bugs are shield-shaped, triangular and are about 5/8 inch long and 3/8 inch wide. Their upper body is in mottled shades of brown, gray or dark green and is covered with dense puncture marks. The underside is usually white, with gray or black markings and legs are brown with faint white banding. Their abdominal segments (banded with black and white) protrude from under their wings. Eggs of stink bugs are light green, barrel-shaped, and found in clusters.

Stink bugs usually overwinter from early September through October and invade structures during this time. They reemerge in early spring and become very active. They live in gardens, orchards, and farms, and feed on a large number of plants including okra, beans, tomatoes, green pepper, grapes, apples, peaches, blackberries, corn, soybeans, maple, etc. They suck plant and fruit juices, making them wilt and distorted. They also eat other pests, such as caterpillars. Stink bugs overwinter in garden debris and in weeds.

Stink bugs pose a huge risk to plants and vegetation. They can be extremely harmful to the agricultural industry if they spread wildly throughout the country. Stink bugs do not hurt humans but can be a great nuisance because they are usually found in large numbers.

What to learn more? NC State Extension is a great resource on the damage caused by these bugs. 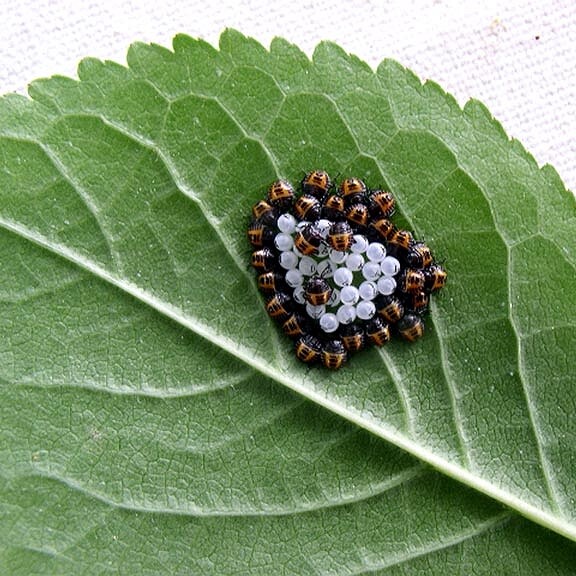 How To Prevent Stink Bugs At The Home

If you find any sign of stink bugs in your yard, home or office, immediately Contact Crown Pest for the best stink bug elimination treatment. Our specialists are adept at recognizing the species involved, the severity of the problem, and any potential threats. Our professionals will visit your premises and take the time to inspect the critical areas and typical habitats. Accordingly, they use the most advanced and the most-effective treatment to make your home, office and surroundings pest-free.

DIY Tips To Get Rid Of Stink Bugs